Volume is a basic physical quantity. Volume is a derived quantity and it expresses the three dimensional extent of an object. Volume is often quantified numerically using the SI derived unit, the cubic metre. For example, the volume inside a sphere (that is the volume of a ball) is derived to be V = 4/3πr3, where r is the radius of the sphere. As another example, volume of a cube is equal to side times side times side. Since each side of a square is the same, it can simply be the length of one side cubed.

Formulas for Calculation of Different Volumes
Volume formulas for some common three-dimensional objects:

What is Specific Volume

The density (ρ) of a substance is the reciprocal of its specific volume (ν).

Density is defined as the mass per unit volume. It is also an intensive property, which is mathematically defined as mass divided by volume:

Materials with Lowest Specific Volume - Densest Materials on the Earth
Since nucleons (protons and neutrons) make up most of the mass of ordinary atoms, the density of normal matter tends to be limited by how closely we can pack these nucleons and depends on the internal atomic structure of a substance. The densest material found on earth is the metal osmium, but its density pales by comparison to the densities of exotic astronomical objects such as white dwarf stars and neutron stars.

It must be noted, plutonium is a man-made isotope and is created from uranium in nuclear reactors. But, In fact, scientists have found trace amounts of naturally-occurring plutonium.

If we include man made elements, the densest so far is Hassium. Hassium is a chemical element with symbol Hs and atomic number 108.  It is a synthetic element (first synthesised at Hasse in Germany) and radioactive. The most stable known isotope, 269Hs, has a half-life of approximately 9.7 seconds. It has an estimated density of 40.7 x 103 kg/m3.  The density of Hassium results from its high atomic weight and from the significant decrease in ionic radii of the elements in the lanthanide series, known as lanthanide and actinide contraction.

The density of Hassium is followed by Meitnerium (element 109, named after the physicist Lise Meitner), which has an estimated density of 37.4 x 103 kg/m3.

Changes in Specific Volume
In general, density and thus the specific volume can be changed by changing either the pressure or the temperature. Increasing the pressure always increases the density of a material. The effect of pressure on the densities of liquids and solids is very very small. On the other hand, the density of gases is strongly affected by pressure. This is expressed by compressibility. Compressibility is a measure of the relative volume change of a fluid or solid as a response to a pressure change.

The effect of temperature on the densities of liquids and solids is also very important. Most substances expand when heated and contract when cooled. However, the amount of expansion or contraction varies, depending on the material. This phenomenon is known as thermal expansion. The change in volume of a material which undergoes a temperature change is given by following relation:

It must be noted, there are exceptions from this rule. For example, water differs from most liquids in that it becomes less dense as it freezes. It has a maximum of density at 3.98 °C (1000 kg/m3), whereas the density of ice is 917 kg/m3. It differs by about 9% and therefore ice floats on liquid water

Volume of an Atom and Nucleus

The atom consist of a small but massive nucleus surrounded by a cloud of rapidly moving electrons. The nucleus is composed of protons and neutrons. Typical nuclear radii are of the order 10−14 m. Assuming spherical shape, nuclear radii can be calculated according to following formula:

Is an atom an empty space?

The volume of an atom is about 15 orders of magnitude larger than the volume of a nucleus. For uranium atom, the Van der Waals radius is about 186 pm = 1.86 ×10−10 m. The Van der Waals radius, rw, of an atom is the radius of an imaginary hard sphere representing the distance of closest approach for another atom.  Assuming spherical shape, the uranium atom have volume of about  26.9 ×10−30 m3. But this “huge” space is occupied primarily by electrons, because the nucleus occupies only about 1721×10−45 m3 of space. These electrons together weigh only a fraction (let say 0.05%) of entire atom.

It may seem, that the space and in fact the matter is empty, but it is not. Due to the quantum nature of electrons, the electrons are not point particles, they are smeared out over the whole atom. The classical description cannot be used to describe things on the atomic scale. On the atomic scale, physicists have found that quantum mechanics describes things very well on that scale. Particle locations in quantum mechanics are not at an exact position, they are described by a probability density function. Therefore the space in an atom (between electrons and an atomic nucleus) is not empty, but it is filled by a probability density function of electrons (usually known as  “electron cloud“).

All RCS components are located inside the containment building.

At normal operation, there is a compressed liquid water inside the reactor vessel, loops and steam generators.  The pressure is maintained at approximately 16MPa. At this pressure water boils at approximately 350°C (662°F).  Inlet temperature of the water is about 290°C (554°F). The water (coolant) is heated in the reactor core to approximately 325°C (617°F) as the water flows through the core. As it can be seen, the reactor contains approximately 25°C subcooled coolant (distance from the saturation).This high pressure is maintained by the pressurizer, a separate vessel that is connected to the primary circuit (hot leg) and partially filled with water (partially with saturated steam) which is heated to the saturation temperature (boiling point) for the desired pressure by submerged electrical heaters. Temperature in the pressurizer can be maintained at 350 °C. At normal conditions, about 60% of volume of pressurizer occupies the compressed water and about 40% of volume occupies the saturated steam.

Volumes of typical PWR are in the following table.

It must be noted the volume of coolant significantly changes with the temperature of the coolant. The total mass of the coolant remains always the same, a change in water volume is not a change in water inventory. The reactor coolant volume changes with temperature because of changes in density. Most substances expand when heated and contract when cooled. However, the amount of expansion or contraction varies, depending on the material. This phenomenon is known as thermal expansion. The change in volume of a material which undergoes a temperature change is given by following relation:

The volumetric thermal expansion coefficient for water is not constant over the temperature range and increases with the temperature (especially at 300°C), therefore the change in density is not linear with temperature (as indicated in the figure). 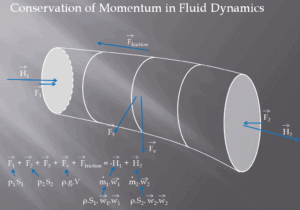 A control volume can be selected as any arbitrary volume through which fluid flows. This volume can be static, moving, and even deforming during flow. In order to solve any problem we have to solve basic conservation laws in this volume. It is very important to know all relative flow velocities to the control surface and therefore it is very important to define exactly the boundaries of the control volume during an analysis.

A stationary plate (e.g. blade of a watermill) is used to deflect water flow at a velocity of 1 m/s and at an angle of 90°. It occurs at atmospheric pressure and the mass flow rate is equal to Q =1 m3/s.

The water jet exerts on the plate the force of 1000 N in the x-direction.

We hope, this article, Volume – Physics, helps you. If so, give us a like in the sidebar. Main purpose of this website is to help the public to learn some interesting and important information about thermal engineering.